Next day my plan was to take the scenic drive along the coast. Then that I had backpacked the Lost Coast Trail, I wanted to rediscover the California coastline that were found and developed as we know, again, which includes the 17 Mile Drive at Pebble Beach, Big Sur, Santa Maria, Santa Barbara and Ventura. Unfortunately, before reaching Estero Bay, I was quite low on gas, and the nightfall was nearing, I decided to take I-5 back home.

In the morning Santa Rosa was blanketed with fogs. It was quite beautiful and also magical as the sun was rising.

Since it was Friday, I wanted to avoid any traffic near the Golden Gate Bridge southbound of San Francisco. So I drove over Richmond-San Rafael Bridge into Oakland.

I soon headed to Pebble Beach to check out the 17 Mile Drive, the world famous posh neighborhood with its pristine real estate properties surrounded by wildlife and a fancy golf course with the breathtaking ocean views.

Pebble Beach is nestled between Monterey Bay and Camel Bay. 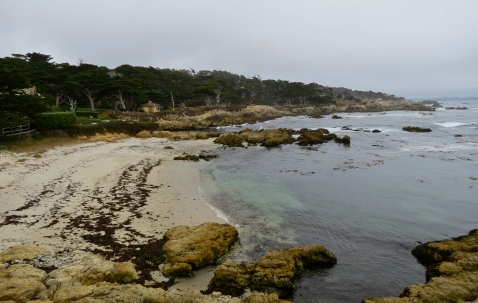 The wildlife habitats in Pebble Beach were very impressive, and it was quite interesting to witness such a juxtaposition between ‘what money can buy’ and a zoo of wildlife along this particular section of the coastline. 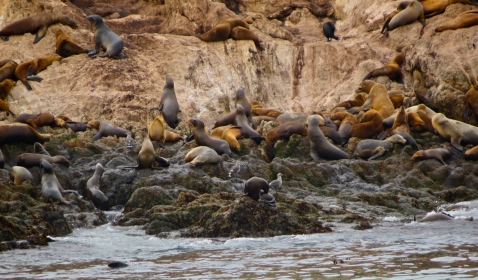 Sea lions and seals were literally covering the rock and sunbathing, and pelicans were busy fishing, and gulls were after treats from tourists just like ground squirrels. It was kind of funny to see that the wildlife illustration board specifically stated ‘do not feed squirrels’ and yet the visitors were busy feeding these little creatures.

I was hoping to have a sight of sea otters, but it was not my lucky day.

Cypress trees were impressive, and the way that the lone Cypress tree broods seemed quite dramatic against the backdrop of the splendid ocean view.

I finally understood where the name of Monterey Media came from, particularly with the Cypress tree icon. Sometimes it is a little things that make you see things differently.

Once I was done with the tour of the Drive, I got back on SR 1 and headed south.

And I reached Big Sur shortly.

It is known for its gorgeous ocean views and the historic Bixby Creek Bridge, which opened in 1932.

According to Wikipedia, it is “one of the most photographed features on the West Coast” due to its pleasing aesthetic design and because of its location along the scenic Central Coast of California.

I didn’t remember getting out of the car and taking photos of the coastline in the past, so I started doing just that.

It was not only the spectacular ocean views that I was enjoying but also the way that the highway was actually built when they couldn’t figure out how to build a portion of it crossing the Sinkyone State Park. As much as I appreciated the convenience of it all, it made my backpacking trip more worthwhile, knowing that what must’ve been like if I wanted to backpack the coast, starting from Mendocino to, say, Ventura. 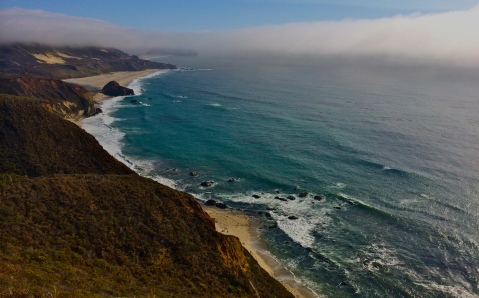 Actually, on my 3rd day of backpacking on the Lost Coast Trail, I ran into two guys who came from London, England. They were backpacking, starting all the way from Oregon with the plan to reach San Francisco as a destination. That was a great idea to enjoy and immerse oneself in nature, I thought. But then again, part of me also wondered why they didn’t do the John Muir Trail with such an amount of time that they actually had. I can’t wait to do the JMT.

Of course, unless they already did it or it was not attractive enough to them.

The fogs rolled in quite a few sections of the coastline, which created very surreal moments as I was driving through the already heavily fog covered roads at times.

And more fogs were brewing in the ocean and were making their move towards the shorelines.

Because I backpacked through the constant showers, fogs and mists just for the last couple of days, it felt like I really understood what these fogs meant and why coastal forests need fog. 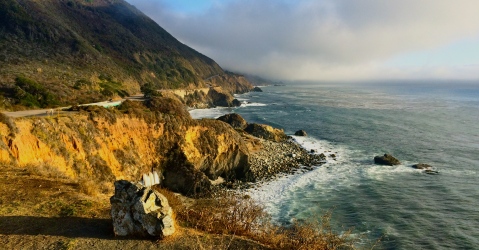 Once again, I was reconnecting myself with nature, in the present. Therefore, I was connected with the past, and also with the future. As the Bixby Creek Bridge has been around for the last 82 years and will be for another few decades if not another century, just like the lighthouse in Shelter Cove.

When I reached Cambria, I decided to get back on I-5 to head home because it was getting dark, which means I would not be able to see anything much, and because I was getting low on gas as well. After refueling in Paso Robles, I continued east and soon got back on I-5 South and headed home.

I am a photographer. My photos have been sold on EyeEm, Adobe Stock and ShutterStock and also featured on ViewBug and G+ Landscape Photography Community, and via Death Valley National Park Instagram and Facebook. My work is the natural byproduct of my love for outdoors - backpacking, hiking and camping in nature.
View all posts by H Peter Ji Photography »
« Previous post
Next post »

Follow A Dose of the Great Outdoors on WordPress.com

1 Way To Keep The Big Dream Alive Is Trail Running

How This Year’s Goal Was Successfully Accomplished