ECBOS (Etiwanda, Cucamonda, Bighorn, Ontario and Sugarloaf Peaks). Doing all five peaks at once had been on my mind for the last few weeks, and the perfect weather told me it was time. Especially, I had never bagged Sugarloaf Peak nor come down via Falling Rock Canyon, so I decided to go solo.

ECBO (Etiwanda, Cucamonda, Bighorn and Ontario) is easy. So, I wanted to combine it with Sugarloaf Peak by coming down on a ridge and out via Falling Rock Canyon. I’d heard about it numerous times in the past, just like Mt. Baldy via Register Ridge before. I heard about Register Ridge so often that, I really wanted to see how amazing it was. When I did it, regrettably I was not impressed by it (although, I gotta say, it is all subjective and I still think that nothing is better going up to Mt. Baldy than via Bear Canyon, but that is besides the point). So, this Falling Rock Canyon had been like that. I wanted to find out.

And now I’ve done it, I know what it is like. The verdict would be found at the end of this post.

My drive to Icehouse Canyon Trailhead was breezy. Since it is a lot closer (about an hour closer) to, say, Vivian Creek Trailhead in San Gorgonio mountain or Deer Springs in San Jacinto mountain, it was quite nice not to get up super early and drive.

I don’t know what it is, but I found hiking up to Icehouse Canyon Saddle extremely easy. It must’ve been the marathon training, and specifically, the fartlek training. I’ve noticed that the way I breathe changed a bit since last Monday, and I think I am seriously benefiting from it. Even on my hikes.

I didn’t spend much time at the saddle and continued my hike to the first peak of the day – Etiwanda Peak.

I came across this junction by the cliff where I was presented the view of San Gorgonio and San Jacinto mountains. And once I was done with Etiwnada, I would be back here to go up along the ridge to Cucamonga Peak. 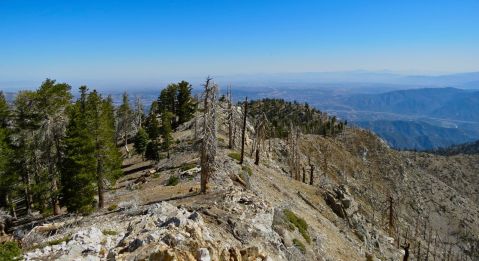 Not a single soul was found at Etiwanda Peak. That is what I love about being up there. It isn’t as popular as the other two – Cucamonga and Ontario Peaks. And yet, it is one of the best. 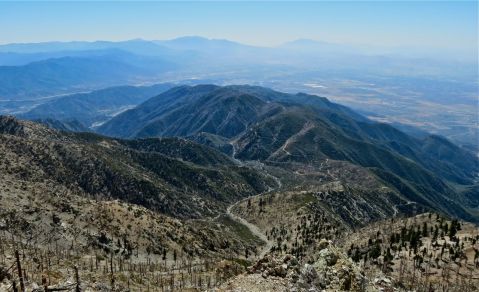 As San Gorgonio and San Jacinto mountains loom in the distance, I just found myself super excited to be here. I don’t do solo hikes often, but when I do, I rather want to find myself surrounded by few or just by myself. And at Etiwanda it was just perfect.

And there was Santiago Peak.

Funny thing is that I have never been up there. I see it all the time whenever I hit either San G or San J summit, and yet all I have done is hiking up San Juan Trail and Los Pinos Trail to Blue Jay Campground in Ortega mountain. It’s still on my bucket list, and it is one of the first to go once I am done with my marathon training.

And there’s San Antonio Peak, aka Mt. Baldy. And against the blue sky backdrop with no clouds whatsoever, Mt. Baldy looked fabulous. But I knew that it may have been packed with hikers by then.

Once I was done with my first snack, it was time to move on. Cucamonga Peak. I knew that there would be quite a few hikers at the peak because I overheard that many hikers were heading up to either Cucamonga or Ontario Peak when I was getting ready at the parking lot.

Cucamonga Peak was already filled with hikers. Not that I do not like the crowds. I hike with San Jacinto Hiking Club all the time. But when I am going solo, the crowds aren’t the thing that I hope to encounter.

I was able to take a shot of having San Gorgonio, San Jacinto and Santiago Peaks all together. That was sweet!

However, I managed to take some shots there while my stay at Cucamonga was very brief. Besides, I had two more peaks to bag before going down the ridge to Sugarloaf anyway, it was a good excuse to head back to the Cucamonga saddle where I go up Bighorn Peak Trail. 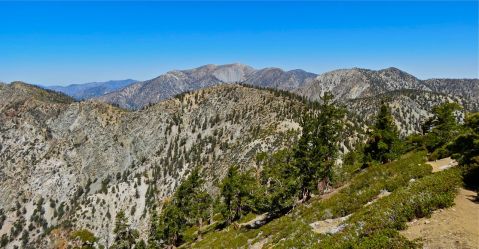 It was nice to be accompanied by all the familiar peaks (Mt. Baldy, Thunder, Telegraph and Timber Peaks) as I was heading down to the saddle.

And there it was. Bighorn Peak. And it is a steep uphill climb.

The Cucamonga Peak trail is going up the hill diagonally.

As I was going up Bighorn Peak trail, I turned around and looked at the hill where I came down a few minutes ago.

When I stopped at the half way to Bighorn Peak, the cool breeze was quite welcoming, along with the Santiago Peak view.

Bighorn Peak trail is steep. It’s short but steep. It isn’t as long as Register Ridge trail, but both can kick one’s butt if he/she isn’t conditioned enough.

But what I miss most is hiking up Mt. Baldy via Bear Canyon, which is still officially closed since the flood last August. Although I know hikers hike anyway, I just want to wait.

At Bighorn Peak, I had lunch while enjoying the view of Mt. Baldy. Once again, it was a perfect kind of day where no single cloud was floating in the blue sky, which was not even remotely bothered by the smog. Or at least, facing north.

All the peaks were just brooding there, very composed, as the sun was beating down on them. It wasn’t a hot day, but warm enough to get tanned in the sun.

Again, at Bighorn Peak, no one was around. It was just me, enjoying the solitude. When there’s no human noise, one can actually hear nature. Birds tweeting, twittering, cheeping, and warbling, insects chirping and quavering, and falling pine cones thumping.

Just like when I was solo backpacking in the Lost Coast Trail. 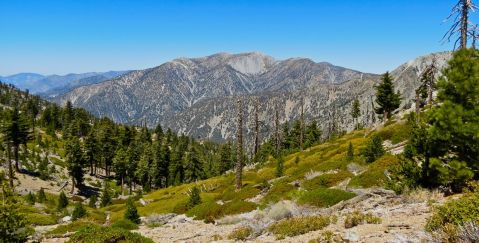 Once I was done with lunch, I got up and moving quickly. Once again, I knew I had to get to Ontario Peak as early as possible in case I end up spending a lot of time going down the ridge to Sugarloaf Peak, which I had never done before.

As I was marching eastbound, Mt. Baldy was cheering me on from my right and Santiago Peak was bucking me up from the left.

At Ontario Peak, I took a shot of the bare tree. It is the signature tree still standing at the top of Ontario Peak. I signed the register, enjoyed my snack and took some photos.

Before heading down, I was quite excited about recognizing Mt. Baden-Powell, Mt. Islip, Iron Mountain and even Mt. Hawkins. 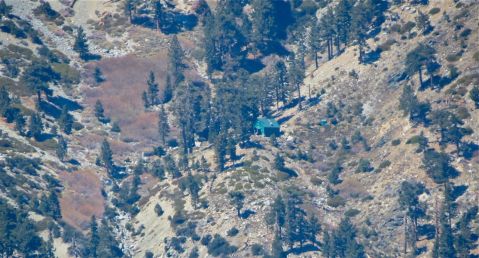 And also, I was able to see Mt. Baldy Hut. It is a hut that one gets to take a break at when he/she goes up via Manker Flat.

It was time to go. Four peaks down, one more peak to bag.

Instead of going back to the Icehouse Canyon Saddle by taking Ontario Peak trail, I traversed down to the start of a ridge that runs parallel in between Falling Rock Canyon and Cherry Canyon and taking it down to Sugarloaf.

As descending, I was more vigilant about the surroundings because I was new to the ridge where I was determined to stay on. 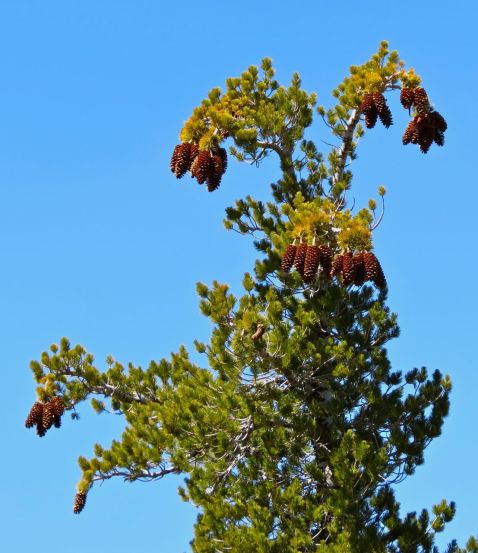 Huge pine cones were ready to fall in any given moment.

Pine trees are very dominant on this slanted hillside.

In spite of the old fire, these dead trees still linger as if they were the ghosts of the mountain. Very haunting.

And rocks were, well, literally falling as I moved every step. No one would wonder again as to where the name Falling Rock Canyon came from once he/she has been here. Or he/she doesn’t have to. Look at the photo and believe me. It was not as fun coming down those rock hillside.

And that is the ridge that I came down. Taken from Sugarloaf Peak. 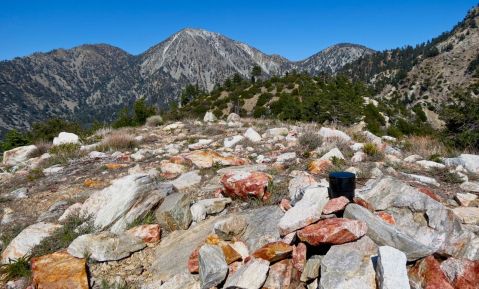 At Sugarloaf Peak, the view of Thunder, Telegraph and Timber Peaks looked great. And it had a very cool looking register canister. Interestingly enough, the last signed date was in March. Not many hikers come up here or often, obviously.

And there’s Mt. Baldy. As the sun started setting, the look of Mt. Baldy also looked rather tired. Or rather beaten down by the sun for too long.

Now that I bagged this peak, which is as dangerous as Dragon’s Head, it was time to head home. In order to do that, I had to descend via Falling Rock Canyon.

While I was getting ready to leave, this big guy came by to say hi. He definitely wasn’t camera shy and posed for me for quite a bit. I bet not many hikers come up here, and he must’ve been even curious to see who the heck I was or why the heck I was there. In that sense, it reminded me of Bighorn Peak in San Gorgonion mountain.

And the stretch of piled rocks like this lasted almost forever… Or till I reached the bottom of Falling Rock Canyon. The only things that my feet found on the ground were rocks, more rocks, and sliding soils. Everything was unstable, and I could not say it was safe. I knew I could make it out before it got dark, but the unfamiliar territory definitely tested my patience and navigation skills. 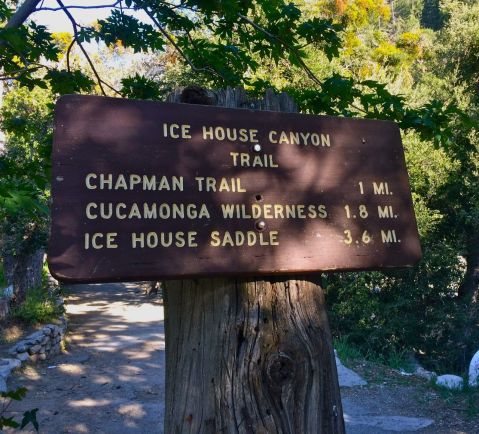 It seemed so trivial when I looked at the sign. Up to the saddle, these trails are so easy to hike on. A walk in the park. And even ECBO was easy.

Coming down the ridge, going up Sugarloaf Peak, which was quite unsafe, and coming out via the equally rock falling and landsliding unsafe path of Falling Rock Canyon were as exhilarating as well as stressful to say the least.

Maybe it was that the GPX file that I downloaded from Everytrail.com was the problem. However, I do not see how else differently anyone would come down the ridge to Sugarloaf Peak from Ontario Peak anyway.

But, from Sugarloaf Peak back to Icehouse Canyon Trail via Falling Rock Canyon can be re-examined. 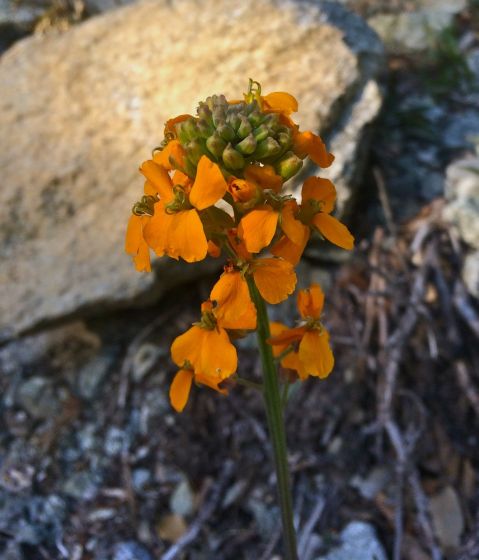 It was quite comforting to know that I was able to stop and smell the flowers or take photos of them when it was over. A great day, and certainly a great hike with some challenges.

And one lesson that I learned from this hike – bring extra water (because I had actually dumped some of it at the parking lot in the beginning – highly unrecommended) when I go hiking somewhere I have never been to. It wasn’t bad, but I was totally out of water when I got half way down the canyon. I mostly stayed in the shade because it was a canyon, so I was not dehydrated or anything, but it was something to remember for the next time for sure.

I am a photographer. My photos have been sold on EyeEm, Adobe Stock and ShutterStock and also featured on ViewBug and G+ Landscape Photography Community, and via Death Valley National Park Instagram and Facebook. My work is the natural byproduct of my love for outdoors - backpacking, hiking and camping in nature.
View all posts by H Peter Ji Photography »
« Previous post
Next post »

Follow A Dose of the Great Outdoors on WordPress.com

1 Way To Keep The Big Dream Alive Is Trail Running

How This Year’s Goal Was Successfully Accomplished